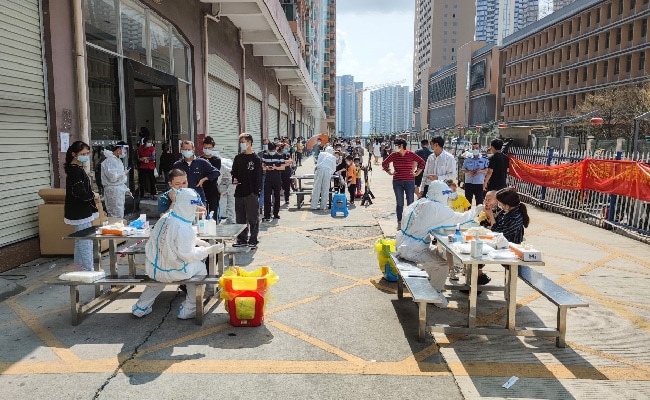 Authorities in the Chinese city of Shanghai have denied rumours of a city-wide lockdown after a sixth straight increase in daily asymptomatic coronavirus cases pushed its count to record levels despite a campaign of mass testing aimed at stifling the spread.

The latest outbreak in China’s wealthy commercial hub remains tiny by global standards but authorities are proceeding with the testing campaign that has seen many people locked in residential compounds for days as the city implements a national “dynamic clearance” policy aimed at stamping out flare-ups as they arise.

Total local COVID-19 infections in Shanghai approached 1,000 on Tuesday, but the city said late in the day it would stick to its “slicing and gridding” approach and screen its citizens neighbourhood by neighbourhood rather than shut down entirely.

The lockdown rumours triggered panic buying late on Tuesday night, with slots on Alibaba’s “Freshhippo” delivery app running out a minute after midnight.

“Please do not believe and spread rumours,” the city government said on its Weibo microblog site.

A health official told a briefing on Wednesday that the city had turned two stadiums into quarantine facilities for mild cases and asymptomatic carriers.

The municipality reported 977 domestically transmitted asymptomatic infections for Tuesday, data from the National Health Commission (NHC) showed, up from 865 a day earlier.

It also reported four local cases with confirmed symptoms, which China counts separately, down from 31 a day earlier.

Throughout the city, while some compounds were unsealed, others were shut for several more days to try to eliminate transmission chains. Some residents said they would be sealed off for two weeks after a neighbour tested positive.

One resident posting on Weibo under the username “Zhang Fan’s Viewpoint” said authorities might as well lock the city down and put an end to the uncertainty caused by 48-hour lockdowns for testing that are often extended.

“In these circumstances, a one-off payment is better than payment by instalment.”

Mainland China reported 2,591 locally transmitted cases with confirmed symptoms on Tuesday, versus 2,281 a day earlier, the NHC data showed. The number of new local asymptomatic cases stood at 2,346 compared with 2,313 a day earlier.

The top steelmaking city of Tangshan said late on Tuesday residents who are not essential workers must stay home unless in an emergency or they need to be tested. The city government did not specify when the citywide lockdown would be lifted.

The northeastern city of Shenyang also announced that its 9 million residents would have to go through another three rounds of testing from Thursday through to March 30, after the three rounds already completed.

As of March 22, mainland China had reported 137,231 cases with confirmed symptoms, including both local ones and those arriving from outside the mainland. There were no new deaths, leaving the death toll at 4,638.

The coronavirus was first detected in the Chinese city of Wuhan in late 2019.