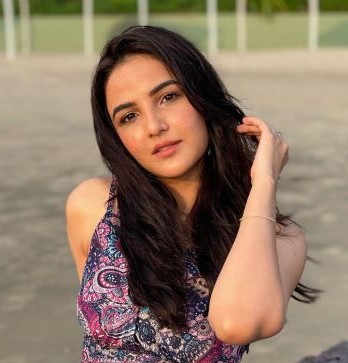 Jasmin Bhasin net worth is $2 million or 15 crores. She is a well recognized actress who has done many TV shows and became famous after Big Boss. She earns through acting, brand promotions and advertisments.

Jasmin Bhasin is a model and an Indian actress. Born on 28 June 1990 she is 32 years of age as per 2022. She is a very famous personality. Initially she is famous for her significant work in Tashan-E-Ishq, Dil Se Dil Tak and Dil Toh Happy Hai Ji.

She is dating Aly Goni (Boyfriend) from past 2 years when they both met in Big Boss season 14 aired in 2020 on Colors T.V. Her life attained a turning point when she participated in Khatron Ke Khiladi and Bigg Boss.

Her fans might be thinking that she mad her debuted through hindi T.V serials but no, she stated her acting career long back in 2011 when she was offered a Kollywood film “Vanaam”.

Apart from this she has also acted in many south Indian movies like Ladies & Gentlemen, Veta, Karodpathi which are movies in Telugu and Kannada languages.

Then in 2015 she initiated her T.V career with Zee T.V’s show Tashan-E-Ishq as Twinkle Taneja as a lead character.

After participating in Khatron Ke Khiladi, she became very famous and grabbed many T.V shows like Naagin 4. She was also offered to participate in Bigg Boss and after playing in Bigg Boss her life was changed and today she has a good fan following in social media.

She has more than 6.6 million followers on Instagram as per 2022.

Jasmin has a supportive and sweet family. She is loved by all her family members.

Jasmin Bhasin was born on 28 June 1990 in a Sikh family in Kota, Rajasthan, India. She completed her primary education and graduation from Kota only. We do not know much about her early life as the actress seems not to tell anybody.

Jasmin has won 2 awards for her debut show Tashan-E-Ishq as best debut and most popular jodi.

In 2016 she met with an accident while she was returning from a shooting. She stated that-

In an interview she also talked about her childhood memories –

What is the net worth of Jasmin Bhasin ?

Who is the boyfriend of Jasmin Bhasin ?

Aly Gony is the boyfriend of Jasmin.

Who is the husband of Jasmin ?

She is currently single and independent women who is dating Aly Gony since 2 years.