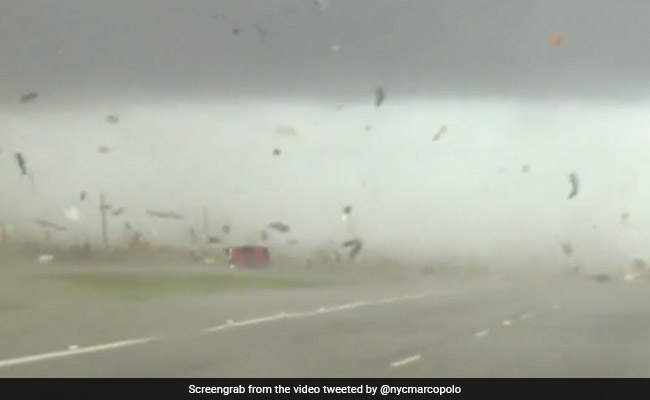 A car is stuck in the tornado in Texas on Monday.

Ferocious tornadoes ripped through central Texas and Oklahoma on Monday, uprooting trees, damaging homes and shutting down highways and airports. The tornadoes have been caused by a strong storm system that meteorologists said could continue for a few days.

Images of destroyed homes and debris littered on streets have flooded social media. PowerOutage.us, which collects data from utilities across the United States, said more than 45,000 people were left without power.

Reports of tornadoes emerged from Texan towns of Jacksboro, Luling, and Round Rock, as well as Kingston in Oklahoma.

The National Weather System (NWS) in the US has warned that the storm system is capable of producing more tornadoes.

The videos being circulated on social media show a truck caught in the tornado spinning on its side, then flipping and finally landing on its wheels. The driver then takes it away from the twister.

Was this truck spinning on its side, then flipped upright before it just drove away after getting caught up in a tornado? ????#txwx#Texas#Tornado

One of the user posted a photo from inside a closet. “Quintessential spring in Texas. Tornado sirens going off means party time in the closet,” the Twitter post said.

Some US networks have released drone footage, which shows the devastation in a town after the tornado has passed.

Here is the #video when the #Elgin, #Texas#tornado hit us today. We were very fortunate to lose only a window to #debris. In addition to these buildings getting destroyed, a pickup truck on the opposite side of the road was rolled by the tornado. #txwx#damagepic.twitter.com/YddeXaTUOf

In Elgin, near Austin, a mobile home was tossed onto the top of a building, reported The New York Times. An 18-wheeler was found overturned in the nearby area, the report further said.

Photos sent to me from my aunt’s house in the Greenlawn Place neighborhood in Round Rock.#roundrock#texas#tornado#severewxpic.twitter.com/y8cvgemBU5

According to weather.com, the severe thunderstorm threat is a classic setup for spring, with a potent jet stream disturbance spreading into increasingly humid air over the South. Here is the forecast released by NWS for the region:

A significant flash flooding and severe weather event is forecast Monday into Tuesday. Rainfall totals of 2-3″, locally 5″+, and rainfall rates of 2-3″ per hour are likely. Severe thunderstorms are also forecast to produce strong tornadoes, large hail, and damaging winds. pic.twitter.com/3uqBqYb5Mn

The storms could cause lightning, heavy wind gusts, hail, tornadoes and excessive rainfall that could lead to flash flooding, the meteorologists have said.